6 Questions with Softsource’s VCIO/Principal Consultant, Barry White, on The Changing IT Landscape 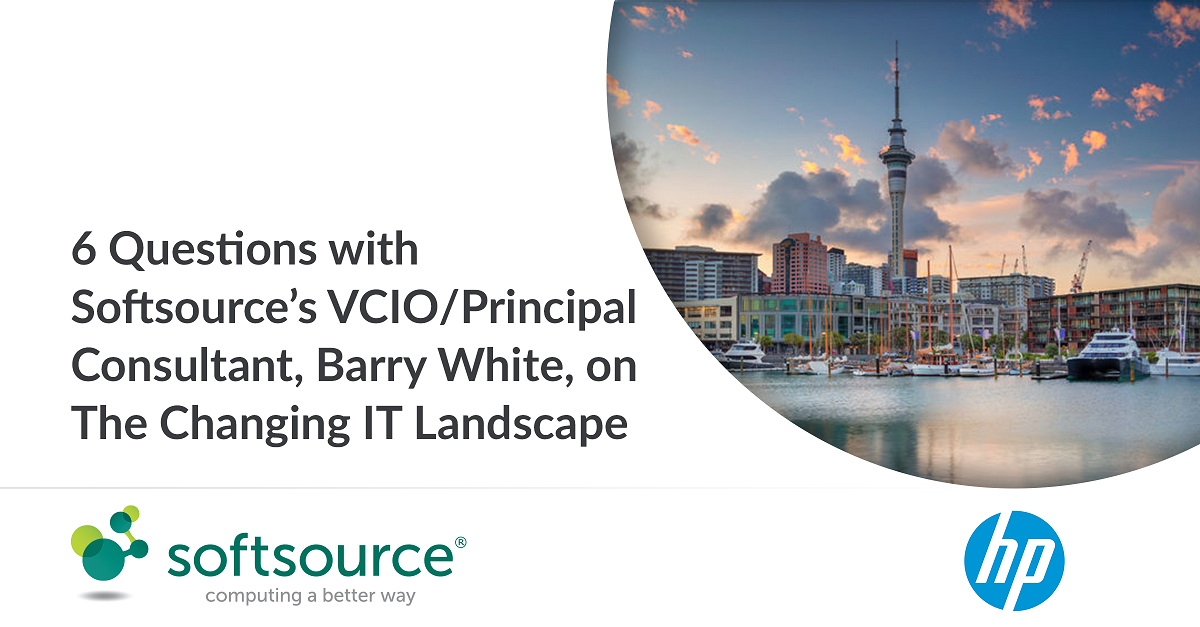 With a passion founded on technology and services as an enabler, Softsource VCIO/Principal Consultant, Barry White thrives on working with organisations who recognise and value the opportunity that evolving technology options afford to their business, with a view to improving productivity and ultimately profitability.

With the IT landscape more important than ever before, we sat down with Barry to delve a little deeper, and explore the key areas occupying his focus during these challenging but also exciting times.

Q. Thanks for your time today Barry. Now, there’s always a lot of buzz words in the world of IT and in recent times, it’s hard to escape the as-a-Service and threat landscape discussions. What do you make of it?

Barry: It’s an interesting one, and there’s an interplay between the two that is somewhat inherent on the other. There’s no denying it, the changing security landscape is a hot topic that’s of perennial importance across the board, especially with the influx of remote working policies over the last 12 months.

People are becoming increasingly aware of the potential risks that are now very prevalent. And through the desire to ensure their staff are highly productive, but at the same time secure without the risk of compromising business-critical data, organisations are looking for a means to bolster their security posture.

One of these means is through working with IT integrators on as-a-Service models. Consider Device-as-a-Service (DaaS) for example; a large percentage of data breaches that occur could have been avoided had the devices been properly patched and up to date. DaaS directly offsets this issue through one of its primary functions which is to manage the end-to-end lifecycle of a device fleet.

It’s a good point that you raise Barry. When considering DaaS, how has it improved over time and why are we seeing it now becoming increasingly more prevalent in the market?

Barry: Well, it’s not a great deal different to what it was when it was first introduced, but there is a number of factors why DaaS is growing in popularity; the threat landscape is definitely one factor, there’s the fact that organisations are very focused on applications nowadays, transitioning from CapEx to Opex is another one, the evolution of the hybrid workplace through remote working, and of course, organisations want to innovate but they don’t necessarily have the time or resources to handle this transformation internally.

So, they turn to organisations like Softsource to assist in the process. You also need to consider Shadow IT, which flows in from the application focus. With so many applications prevalent that aren’t business critical like a CRM or ERP, IT is struggling to stay across all of it, but DaaS allows for a central point of management across the entire fleet with visibility.

Q. Can you elaborate a little more on the notion of organisations being highly focused on applications?

Barry: Sure. Because there’s an increasing need for collaboration and the ability to work from anywhere, on any device, the style of conversations that we’re having with our customers are becoming much more about the applications that they’re using, and a large majority of these apps are now consumed as-a-Service themselves, whether it be Microsoft 365 or something else.

So, being able to talk about the app and device and support wrapped in an OpEx conversation is testament to the changing IT landscape. We’re in the midst of a managed service explosion, and when you consider that perspective, it’s an on-going challenge for Managed Service Providers (MSP) like Softsource to differentiate yourself from competitors, and equally hard for customers to differentiate as well.

With this evolving phenomenon of DaaS and SaaS, how is Softsource addressing it while maintaining differentiation from the market?

Barry: That’s a great question. First and foremost, Softsource has a very strong practice from an application standpoint. For a lot of our customers, we are not the incumbent integrator for their infrastructure, but we are from an application standpoint, which in many ways is a reflection of our approach. Microsoft Teams for example, is a platform that we specialise in and spend a lot of time assisting organisations to leverage it correctly, especially over the last 12 months.

IT is no longer a cost centre, and it’s not just about the device and security, but how you use the applications and how you transform your business when using those applications, which is why we introduced our Devices on Demand solution; a DaaS offering that combines analytics, management and support services for every stage of the device lifecycle, plus Microsoft 365 and enterprise-level security for one all-inclusive price per-user. Through the Devices on Demand model, all four factors are addressed - It’s an OpEx agreement for predictive costing, it mitigates the threat landscape from a device perspective, better facilitates a remote or hybrid workforce, and with the application suite included it delivers on one of the primary needs for the customer. The application focus is very important for us also, and it’s an approach further reflected through our Virtual CIO practice.

Q. It’s a solution that ticks a lot of pertinent boxes for organisations in today’s market. You mentioned your Virtual CIO practice, how did that eventualize?

Barry: Well it’s very pertinent to this discussion really. It came about through a realisation that the market was changing and that we needed to get closer to customers on a business level as opposed to just a technical level. The Virtual CIO is all about providing business strategy and a defined roadmap for the customer, which is fundamentally driven from a desire for business/digital transformation.

Just as an example, from a board level perspective – they know they can leverage more from their technology, but they don’t know how to get there – Softsource’s natural partnership develops in this space. And again, it’s about that application approach, because it’s facilitated from inside the business through a desire to transfer knowledge and use tools in the manner that they’re designed to be used. Devices on Demand can be a key part of that facilitation process – enabling an organisations transformation.

Q. So its fundamentally about looking at the whole stack from the top and how to best facilitate that application for the benefit of the organisation?

Barry: Absolutely, it’s arguably one of the most exciting times to be in the technology industry because of this transformation in approach combined with the ever-increasing importance of technology.

Q. Touching on that, and we know it’s a hard question to narrow down to a particular focus, but where do you see the interplay of technology and business moving in the future?

Barry: It’s hard to ignore the growing hype around AI. If you think back to the original premise of what computers are; they’re designed to make our lives easier. What we see a lot of and what a lot of organisations advise is that workers spend roughly 20% of their time locating things, whether that be a file, link or connecting to a meeting. The continued development of AI is providing a highly automated way of storing, finding and organising things.

At Softsource we set a mission statement for technology; better information more easily. AI is the driving technology now and more automation will continue to become the norm.

At Softsource, our promise is: “To make our customer’s life easier and their organisations more productive and efficient.” There’s never been a better time to try Devices on Demand. Enquire now and our specialist team will be in touch to assess your needs and find the best solution for you.