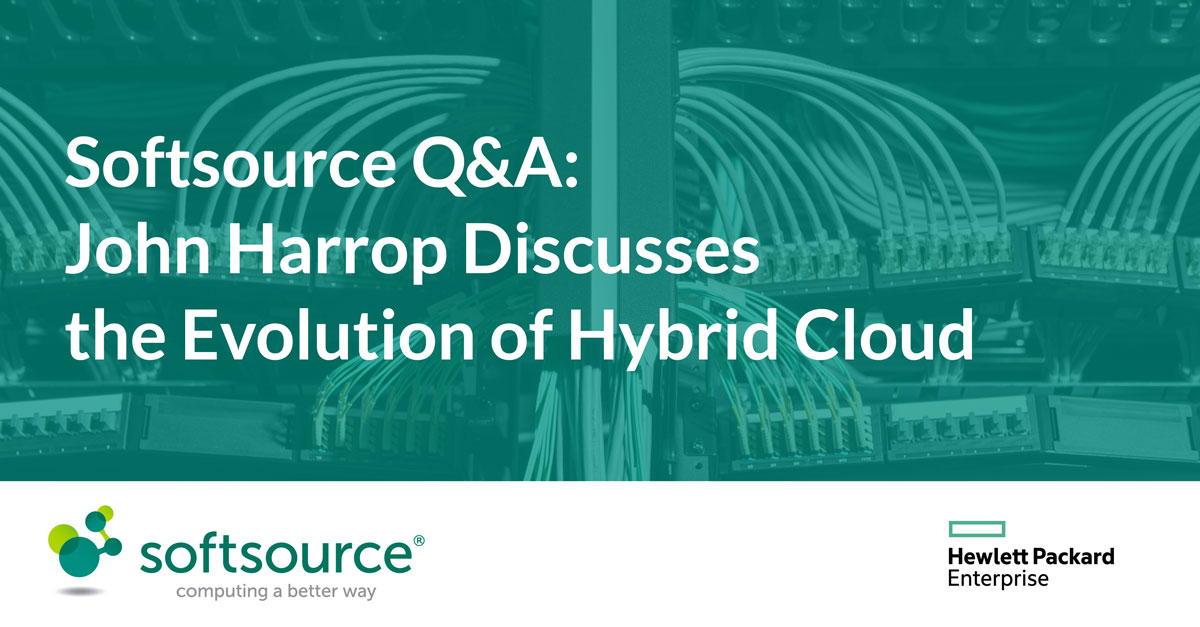 It seems like overnight hybrid cloud has become the infrastructure model of choice. So, how did we get here and how have our infrastructure decision processes evolved? To find out, we spoke to John Harrop from Softsource to hear some of his firsthand experience in working with the changing IT landscape over the past two decades.

Q. How were organisations creating flexibility in their infrastructure environment pre-cloud?

John:  If we go back 30 or 40 years, we had mainframes and people bought bureau time. Which isn't a great deal different than today, where people buy time on public cloud. Once people started buying their own servers and their own infrastructure, that was generally the process for probably at least two or three decades. In the decade before cloud, be it public or private, people were heavily into the virtualised server space.

They were looking to take the server assets they had and extend the usable life of them. Through that virtualisation came the ability to run workloads distant from hardware as it extracted out the layer between the hardware and the application. Much as containerisation is doing to micro services today, virtualisation gave people more flexibility.

Q. How were businesses making their infrastructure decisions pre-cloud?

John:  They were having to use a crystal ball approach to predict what their usage might be like in three years’ time, while planning on the fact that they'd probably be keeping assets for five years and doing one major upgrade of server assets at three years.

This would then involve going cap in hand to finance to get the money for the large capital outlays. It was quite a structured and rigorous process that took time to plan.

The world moved a bit slower back then. Your marketing department would have a year's worth of marketing up in front of them. Your product design people would be designing stuff for two or three years out.

Now, all of that activity has been compressed. People are now working on the three-month marketing plan, and what products they can produce in six weeks with rapid prototyping.

Q. What were the original drivers of public cloud development?

John:  Software developers were heavily motivated to use cloud as a delivery mechanism for their software. That’s because, of course, it's very hard to pirate a cloud version of an application.

About 10-15 years ago, piracy was a huge thing. So, there was motivation from the large manufacturers and publishers of software to cloud enable their software.

At around the same time, Amazon came along with these huge annual sales peaks, but it had all of those compute and storage resources sitting around doing not very much for the rest of the year. So, they looked at ways to make those resources available on a per minute basis for other organisations to use. And that is basically where the public cloud got its start.

Q. When did you notice the trend towards adopting hybrid cloud?

John: There was a realisation that cloud is just a tool to do a job, just like a Phillips screwdriver. It can do some jobs very well, but not all jobs.

Putting all of your eggs in the cloud basket means you have a great reliance on the software vendors, for example, who want to keep that software going and provide support. But people began to notice they were always racing to maintain or upgrade to the latest version, and they realised they needed a more stable and phased approach to actually be more adaptable.

Hybrid cloud has come along and allowed organisations to take the best of both worlds approach. Now that the tools are there to move seamlessly from one environment to the other, it doesn't add a lot of overhead to the running of the department.

It basically gives them all of tools in both the public and private cloud toolkit – whether that’s to burst an application quickly into public cloud or to maintain compliance and performance in a private cloud or on-premise infrastructure.

Q. Why should more organisations be leveraging hybrid cloud?

John:  It’s about flexibility, portability, adaptability. All of those abilities have moved to the top of the list.

Cost containment and cash flow are going to be bigger concerns than ever in the next year or two. Big hardware purchases are going to become less likely, and businesses will also be looking closely at the costs of the services they currently run in each infrastructure environment.

It’s a bit like a business that has a percentage of full-time employees and a percentage of contractors. Hybrid cloud gives you the same variability for additional reach and capacity when you need it, but also allows the ability to scale back when you don't.

Data management is also a growing concern, particularly in a less stable global environment. You need to know where your crown jewels are located for every possible event. Likewise, in the data your applications use, we tend to have data being stored in different environments without thinking how these applications and systems can talk to each other.

Ultimately it’s about finding a hybrid cloud partner who can help you manage all of the different risks and costs of each workload. Rather than going all or nothing with either public or private cloud, Softsource can help you find a model that maximises the use of your assets while still getting the best performance and security.

With entrada Hybrid IaaS, Softsource can bring you an integrated hybrid cloud solution that meets the needs of your business today and adapts as your business grows. With an industry-leading portfolio of solutions and more than 20 years’ experience in deploying hybrid cloud, Softsource and HPE have a proven record of reducing overall implementation time by up to 50%. Contact us today to begin your hybrid cloud journey.